Amazon, the world’s largest retailer, is no stranger to disruptive technology. The brand built its name by recreating the face of e-commerce. But its latest tech venture is in sustainable power, and we’re just a little bit excited at the news! Amazon’s renewable energy investments are reaching new heights and we’re happy to see a fellow business striving to go green for a better future. If they can do it, so can any other business!

In 2019, Amazon announced that it aims to run entirely on renewables by 2030. By mid-2020, it changed that goal, claiming it’s on track to achieve it by as soon as 2025. That’s an impressive statement, considering how massive a company Amazon is, with fulfilment centres across this entire world.

A company of Amazon’s size consumes a remarkable amount of electricity and this is important to remember.  As 2025 draws nearer, the e-commerce giant has little time to switch to renewables. Here’s how Amazon is making it happen…

Amazon’s renewable energy goals are large, so it’s had to take some significant strides to pursue them. In late 2019, the company launched the largest corporate wind power purchase in the United Kingdom! This project, a wind farm in Kintyre Peninsula, Scotland, will generate 168,000 megawatt-hours of energy annually, enough to power 46,000 homes.

Since Amazon consumes so much power, it can’t generate enough on its own yet. To help reach its goals, the company has partnered with @Shell to supplement its renewable energy efforts. Shell will provide power from an offshore wind farm off the coast of the Netherlands, helping both Amazon and the company’s own sustainability goals!

Amazon’s Other Investments in Renewable Energy

Amazon’s renewable energy investments include more than generating clean power for its operations. They also cover funding for other businesses that provide sustainable power services or technologies.

Investing in other renewable technology developers can also help Amazon find new solutions to its energy issues. Supporting research in this area can lead to new technologies and services that would make large-scale renewable energy more viable. Amazon would then have a better chance at meeting its goals on time!

How Will This Impact Energy and Technology in the U.K.?

This shift towards sustainability could impact the overall energy and technology sectors in the U.K. Amazon is the world’s leading cloud service provider, accounting for 32% of the global cloud market. As a result, when its data centres run on green energy, the U.K. companies that rely on them will become more sustainable – a true domino effect!

Since so many services rely on Amazon’s data centres, its renewable infrastructure must be reliable. Any disruptions or malfunctions could jeopardise the cloud processes of U.K. businesses. In light of these potential consequences, Amazon has to ensure its wind and solar projects will provide a constant & sufficient service.

As Amazon shifts to renewable energy, it could inspire other U.K. companies to do the same. If a business as massive and energy-intensive as Amazon can run on renewables, a smaller business could follow on example! The success of Amazon’s renewable energy projects could start a clean power revolution among U.K. companies…This is such an exciting for UK Entrepreneurs!

Amazon’s Renewable Energy Goals Are Bold but Not Impossible

Relying on sustainable energy can seem like a pressure fuelled goal many. A business as large as Amazon aiming for 100% renewable power in just a few years is a massive goal. As the retailer increases its green energy projects, though, it seems increasingly likely they’ll reach these high aspirations!

If you are a business owner who is looking to switch to a greener business ethic, we want to hear from you! Let us know your views by emailing mail@esegroup.co.uk 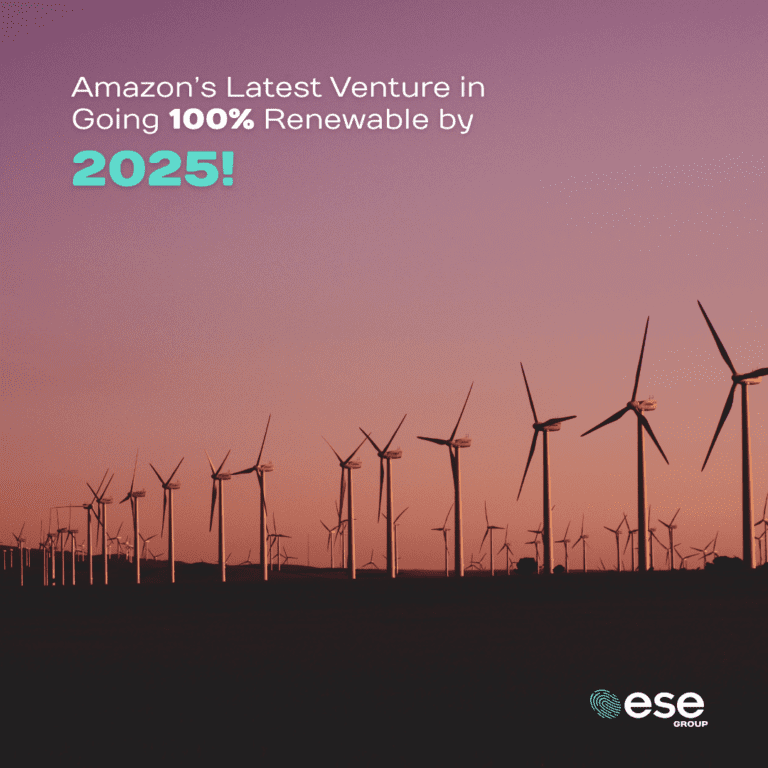